It was a last minute plan. On Sunday, Dec 2nd, 2018, Tyler and I decided to drive down to the Mojave Desert and check out the gutted and wrecked B-52s and the B-58. I have seen a few astrophotographs taken at this location and have been wanting to check them out for a long time.

We were planning on scouting the region for future Astro photography trips and also to get familiar with the area as to how far we will have to off-road in the event we need to drive in the dark to reach the air base.

Our original plan was to take the dirt road for about seven-plus miles to the base off of somewhere between Wheeler Road and Shadow Mountain Road on HWY 395. However, about a mile in, we saw that the entire area was fenced off and there was a notice posted stating that we are near an active bombing range… We both looked at each other and went like Whaaat??!!

We quickly googled (lucky we had cell service in the middle of nowhere) for an alternative route and found that we could access the area through the north entrance of the Air Force Base. We drove straight through an unmanned gate on a paved road into the base and just followed the route till the GPS took us to a spot close to one of the wrecked flights. From here, we had to do some offroading to access the trail and this could have only be done with a high clearance vehicle. Fortunately, we were traveling in a Jeep.

We made our way to the dirt trail that led us to our first stop, a B-58 named Snoopy. We were on high alert as we did see tons of warning signboards along the road stating that this was a controlled and restricted area.

We checked out our first spot and took some pictures. I realized that no matter what I tried, the scenes were not all that appealing or captivating.

I felt that the small hills and the dried up lake bed that the wreckage was on, kind of taking the attention away from the jets by blending in with them. It was challenging to create some separation between the wreckage and the background. As you can see below. I was not too impressed with the settings and scenes around the jets.

At this point, we decided to go explore the other wreckage. Our next stop was only a few blocks away from where we were. We just followed the trail that took us to the two gutted B-52 bomber flights

We checked out the planes and took some pictures and decided that we are going to end the day at this spot as the scene felt more appealing at sunset. That meant that we had about two hours in our hand to explore other possible wreckages.

We then decided to drive back the way we came to the paved road to drive to the third spot, which was quite easy to access. We got out here and took some pictures of the small Jet and the Jeep that we drove in.

We still had more time to kill. So I suggested that we take some videos of Tyler doing some off-roading stuff in the dry lake beds. I think the video came out ok. We had fun making them. 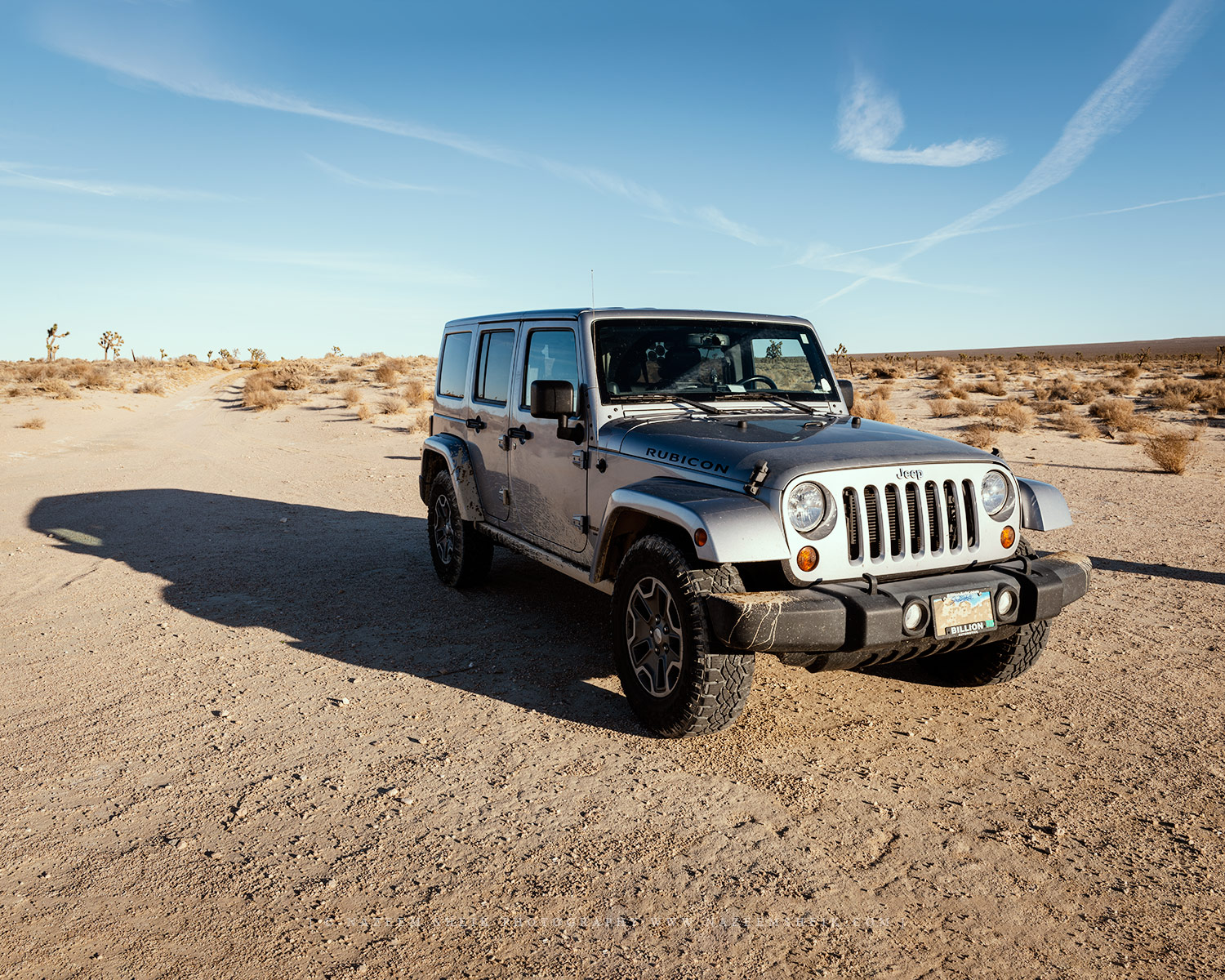 As the sun started dipping closer to the horizon, we decided to drive through the lake bed back to the B-52’s wreckage to set up for the sunset and twilight shots as we were losing light really fast.

We drove this far and I didn’t have one good picture to add to my portfolio yet. This feeling was really gnawing me at the back of my mind.

I decided then to focus on the tailpiece of the B-52 to get one good shot. I had to try a few compositions before finding one that I liked. When I took the first shot and checked, it was a simple shot, with the interior of the tail end looking dark and had no character.

We then decided to spruce things up and try something new by adding some colored lights to the insides of the tailpiece. We used our headlamps and Lume Cube to do this. This added some drama and character to the subject. What a difference that made! I really liked how the image turned out from something unplanned and different. 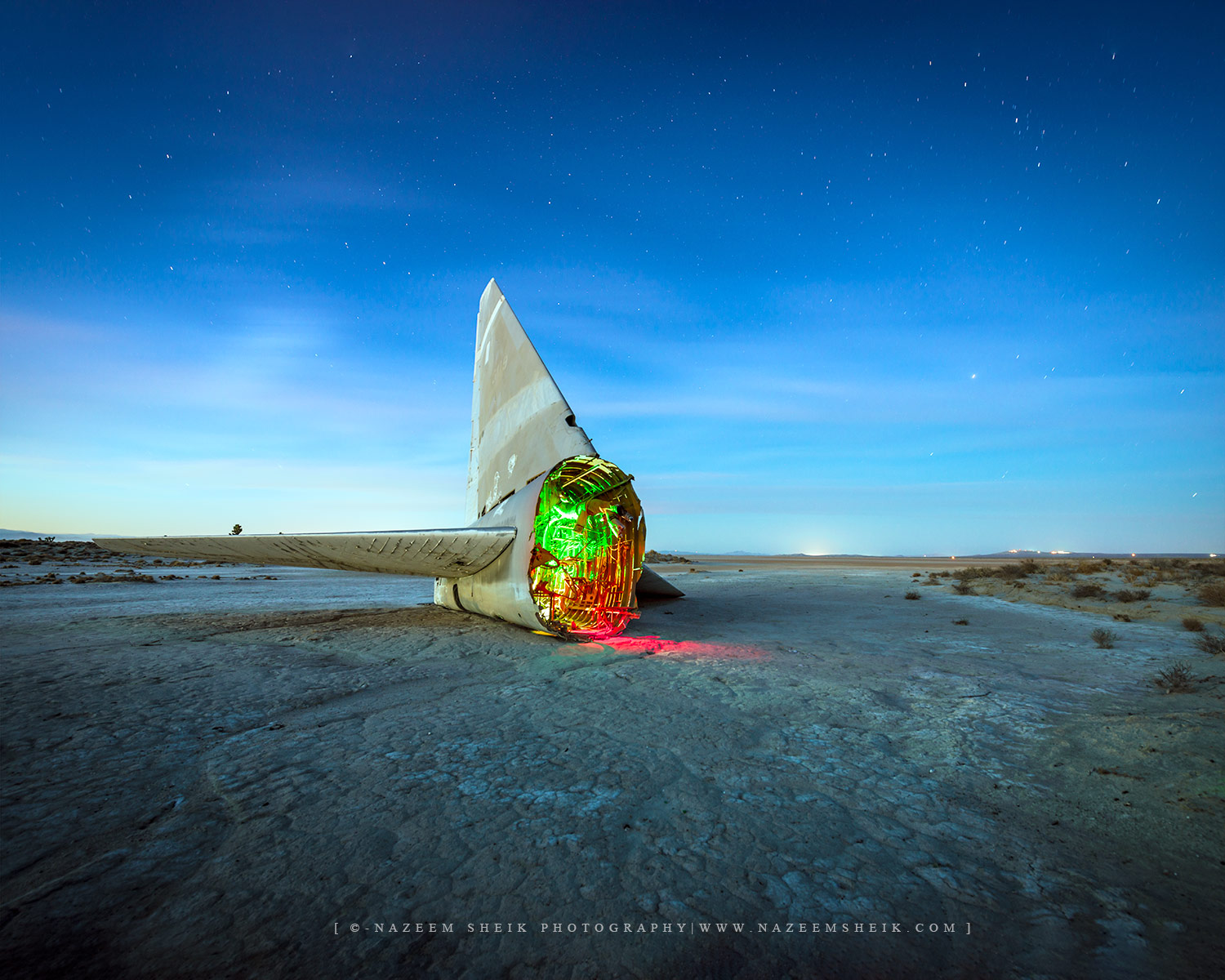 This opened up other possible ideas and I am definitely going to try these colored lights in the future on other subjects that I come across.

After reviewing the images on the back of the camera, I was happy that I have a few keepers that I could add to my portfolio. We then decided to call it a day as we had to endure a three-hour drive back home.